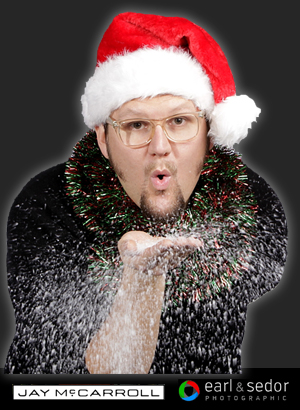 Well actually, Jay has come back to Kingston from his current life in Philadelphia.  You may remember Jay as the winner of the inaugural season of Project Runway.

Jay is an NEPA native and currently running his website,  jaymccarrollonline.com as well as teaching at Philadelphia University He is also in the process of designing new fabrics and tote bags for his company.

As a matter of fact, some of the the fabrics used in the shoot were designed and produced by Jay.

He was a blast to work with…..  He turned out to be quite the comedian and he certainly brought an air of levity to the shoot.  We enjoy shooting celebrities, but Jay took the top honors with his quick wit and flamboyant persona.

JB and I pulled out all the stops on this one.  We even brought out the high end fake snow.  Of course, neither our Mac nor our Canon EOS 5D Mark II  camera flinched under the rigorous shoot.  We captured over a thousand images during the shoot and even managed to get in one ourselves.

Oh Yeah…  and no blue M&M’s were requested for the green room- just Coke Zero! 🙂

We are glad that Jay chose Earl & Sedor for his new series of photographs.